Have you found an insect repellent method that unfailingly works for you? Because I haven’t.

Avoiding bites is my single biggest and most frustrating travel challenge. I should add that it’s also a thing in my home base country, New Zealand. Sandflies are so troublesome in some regions that, with typical Kiwi humour, they are celebrated. 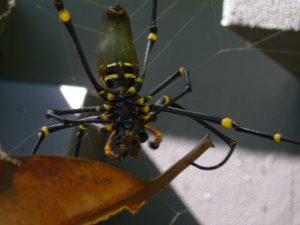 Mosquitoes, sandflies, fleas, all seem to see me as the equivalent of [insert your all-time favourite food here].

I’m pleased to say I haven’t encountered bed bugs so far, but I’m sure it’s only a matter of time as they seem to be on the increase.

Now don’t get me wrong, I like insects in general; they perform vital functions in our ecosystem. I didn’t mind the humongous spiders that used to pay the occasional surprise visit to our bathroom in Vanuatu, nor the rather large golden orb spider that visited our friends’ garden in Queensland (see photo). But insects that sting, bite or suck upon my person, for no reason other than their own gourmet tastes, are fair targets for assassination as far as I’m concerned. Apart from the 4 days of chronic itching misery they inflict upon me, they can also pass on such delights as malaria, dengue fever, Ross River virus – and the list goes on. Trouble is, I’ve yet to find the right weapon to use against them. Here are some of the pieces of advice I’ve been given over the years, with (mostly unsatisfactory) results:

Don’t get bitten in the first place

Of all the recommendations I’ve been given, this one – listed in a ‘how to avoid malaria’ publication – is probably the most useless I’ve ever received. I can’t argue with the logic of it, but – really.

These products have been my usual go-to, including the more advanced organic, ‘natural’ and ‘eco-friendly’ versions. I’ve never found them to be particularly effective. Having sensitive skin means that I’m fussy about what I put on it, particularly since it goes into the bloodstream too.

How about a citronella or eucalyptus candle?

Tried them, loved the aroma. So did mozzies, who continued to love me.

Likewise, this had no effect whatsoever.

Mosquitoes go for people who are short of certain vitamins 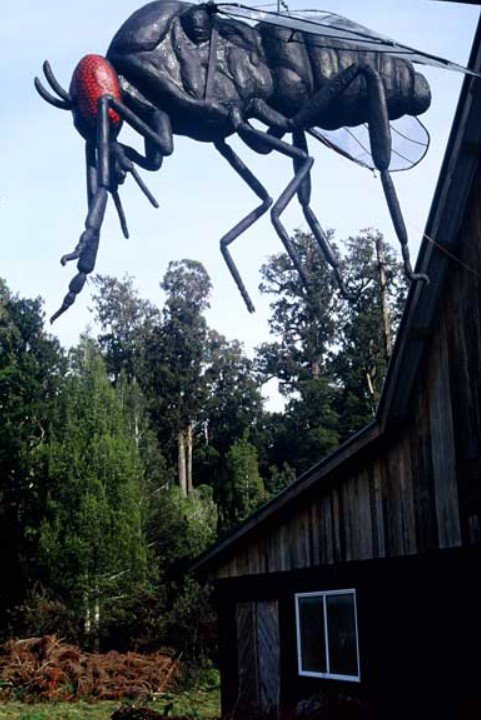 Sandfly over a cafe in Pukekura, NZ – typical Kiwi humour

I was excited when I heard this theory. It sounded plausible, and I thought it might be the key to my problem. So  I decided to put myself on a course of multivitamins a couple of months before my subsequent trip. It made no difference at all to my attractiveness to the little biters, but hey, it probably improved their health.

This just made it easier for the mozzies to crawl about my person undetected and bite me without being seen.

Mosquitoes are only active at night

This is total baloney. They get me at all times of the day. I once stepped off a plane in Nice, mid-afternoon, and was besieged within half an hour. News travels fast in mozzie lands.

Now I’m sure this works, unless you have to slip out to visit the bathroom during the night. But it seems a little over the top to take one of these to your nice hotel. Different if you’re camping or glamping.

Sounds like an old wives’ tale, right? What’s more, she was kidding. I put garlic in everything anyhow, so I must confess I didn’t have much hope for this one.

So what does work?

So far, there are only two solutions that have partially worked for me: plug-in repellents, and covering up my arms and legs. The latter is usually effective despite the fact that I’ve been told that mozzies can bite you through your clothing. This might be technically true, but it hasn’t happened to me so far. It’s a pain to have to cover up on a warm balmy night in a tropical place, mind you. Still, I’d rather have that inconvenience than get bitten. Plug-ins are by far the most effective method I’ve tried so far, and a real life-saver for being able to sleep at night without the fear of that dreaded high-pitched whine around my ears.

If anyone has found a good solution, I’d love to hear from you.

15% LAUNCH DISCOUNT ON THE NEW COCONUT LANDS COLLECTION THIS WEEK AT UNLOCKED BOX!

Good morning world! Not too shabby for a Monday...

🎾6 AWESOME THINGS TO DO IN WIMBLEDON OTHER THAN

🌊 ERICEIRA - A HIDDEN GEM ON THE SILVER COAST,